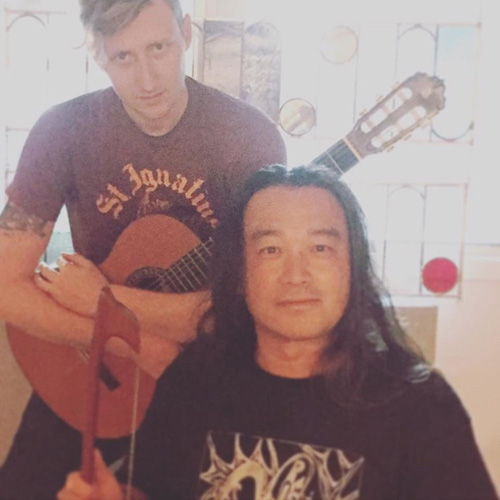 Tatsuya Nakatani is an avant-garde percussionist and composer, active internationally since the 1990's; Nakatani tours extensively, performing over 150 concerts a year. He teaches master classes and lectures at universities and music conservatories around the world. Originally from Japan, he has lived in the United States for a quarter century and he makes his home in the desert town of Truth or Consequences, New Mexico. Nakatani creates his distinctive music centered around his adapted bowed gong, in consort with his hand-carved Kobo Bow both of which are also supported by an array of drums, cymbals, and singing bowls. Within this framework of contemporary / avant-garde / improvisational work, one can still recognize the dramatic pacing, formal elegance and space (‘ma’) felt in traditional Japanese music.

Shane Parish is a guitarist from Asheville, North Carolina, who is known for his work fronting the electric and aggressive, avant-technical duo Ahleuchatistas, who mix influences of jazz, progressive rock, avant-garde, and experimental to create a unique sound, and who have toured internationally, releasing 8 albums released on Tzadik, International Anthem and Cuneiform. He is simultaneously known for his dexterious, finger-style acoustic guitar work, informed by Americana masters such as Fahey and Basho but also reflecting his own wide range of musical interests as well as his continuing study of folksongs from all over the world.